Ever since I had the misfortune of eating that awful, vile tasting dum chicken biryani at the Paradise Biryani outpost in Jackson Heights, NYC, I have been scouting for a nice Dum Biryani place.

The opportunity presented itself the other day as I was walking in Iselin along the Middlesex Avenue (from the church parking lot) toward Oak Tree Road.

Much to my delight, I saw the huge sign of Hyderabadi Delights with pictures of Biryani plastered on the outside wall of the Ganesh Dosa House food court.

Impulsively, I walked into Ganesh Dosa House Food Court at the intersection of Middlesex Avenue and Oak Tree Road.

Hyderabadi Delights is located near the entrance as you enter from Middlesex Avenue.

The Hyderabadi Delights counter was empty.

There was noone around to take orders. It was so quiet that I wondered whether it was even open for business.

Since I could make out some activity in the kitchen behind the counter, I pressed the bell lying next to the menu cards.

I paid the bill and waited near a table. It took about 20 minutes for Hyderabadi Delights to get my food ready.

The two Biryanis came with a total of one raita, one gravy, four slices of raw onion and two cut limes on the side.

The same middle aged waiter called out to me and handed my Biryanis.

The aroma of Dum Biryani was so enticing that I picked up some plastic spoons, forks and napkins and settled down at a table to taste it.

In retrospect, it was the right move.

Above all, the Hyderabad Dum Chicken Biryani box came with an enticing aroma of Biryani spices.

It was very tasty as the Biryani spices had seeped well into the Basmati rice and chicken pieces. 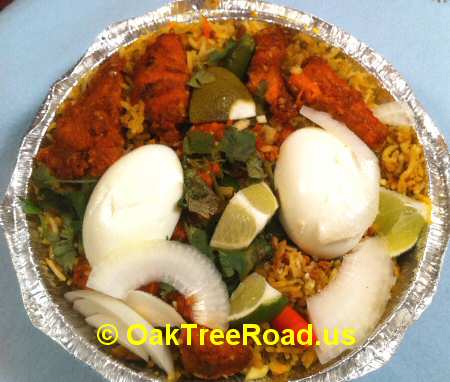 My two complaint with the Hyderabadi Delights Dum Chicken Biryani was that some of the Chicken pieces were all bone and, second, the dish could have been a little spicier.

The serving size was decent and sufficient for a meal for two light eaters. 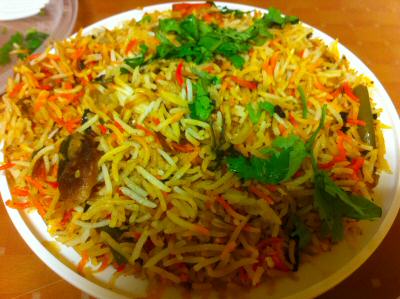 The proportion of Biryani spices was just right resulting in a divine taste on the tastebuds.

What I liked most about Hyderabadi Delights' Dum Biryani was the absense of clumps of Biryani masala paste coming into the mouth. I have encountered that nonsense elsewhere.

My order of the two Dum Biryanis came with raita and peanut gravy on the side. 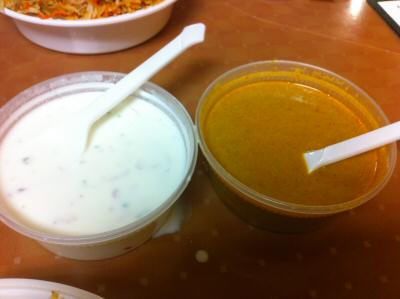 Delicious Dum Biryani Raita & Gravy
Raita was medium thick with a nice flavor of onion, green chilli and cilantro leaves. It was soothing to my taste buds.

Man, it was easily one of the best onion raitas I have had in New Jersey.

I poured the raita and gravy on top of the Biryani and ate it with mucho gusto.

I also spooned up and ate the raita and gravy directly. Yummy!

Ambience is horrible at Hyderabadi Delights.

It's a hole in the wall inside the Ganesh Dosa House food court.

Hey, there was nobody even to take my order around 4 pm on a weekend. I had to ring the bell on the counter to get the attention of kitchen staff.

The lazy fellow at the counter did not care to put any spoons, napkins or plates though I clearly specified that it is takeout order.

Yet another irritating thing was that the Hyderabadi Delights accepts primarily cash payments and did not print or offer a receipt for my payment.

When I enquired about credit card payments, the same middle aged waiter was not pleased and told me that he would have to run the credit card at Ganesh Dosa House. He added that there would be an additional charge of 7% in the form of tax which he will not charge if I pay cash.

"I won't charge you tax. You don't pay me," the balding Telugu fella at the counter told me with a wily smile.

I was irritated by this whole exchange but I did not want my credit card going to a different store from where I was ordering the food. So I reluctantly paid cash.

It'd be nice to see the New Jersey tax authorities stopping the shady practices engaged in by some Indian businesses on Oak Tree Road.

Notwithstanding my irritation about the payments and not getting a receipt, I'd recommend Hyderabadi Delights Dum Biryani to all ye fans of the famed South Indian Biryani rice. - © OakTreeRoad.us