Folks, we've had Biryani at several Indian restaurants in the New Jersey and New York area.

But never such an unpalatable, vile tasting Biryani accompanied by spoiled gravy as the one served by Paradise Biryani Pointe on Oak Tree Road in Edison.

You see, the other day, we were driving on Oak Tree Road and looking for a restaurant with a open sign so that we could quickly get a takeout.

When we saw the bright OPEN sign hanging on the Paradise Biryani Pointe door from Oak Tree Road, we quickly turned into the parking lot.

Although there was a OPEN sign, the Telugu-speaking girl at the counter looked irritated at being disturbed and kept muttering Kitchen Closed, Kitchen Closed. She told us that even takeout was closed and rudely asked us to return at 6PM.

As we were about to leave, a young fellow came out of the kitchen area and told us that dine-in was closed but takeout was still available before quickly retreating into the Kitchen area behind the cash counter.

We were surprised at the lack of coordination between the staff but happy that we could get something to eat.

Picking up a copy of the takeout menu on the counter, we were about to order a long list of items when the Telugu girl, by now an angry camper, started muttering Only Biryani, Only Biryani. So we quickly settled on Egg Biryani ($11.99).

By now, the angry girl was on the cell phone again, with a boyfriend, girlfriend, parent, spouse, Peddakka, Nanamma, Tatayya or whoever.

To put it in one word, Paradise Biryani's Egg Biryani is Horrible.

Maybe, just maybe it's good enough for dogs but most definitely not for humans, particularly paying customers.

Because it is a spicless, flavorless travesty accompanied by spoiled gravy. 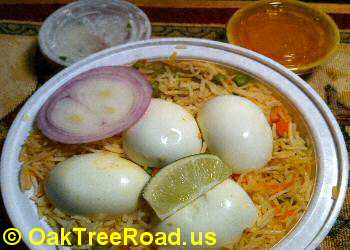 The Telugu girl at the counter was busy chatting away on her cell phone and in a hostile mood.

How can the kitchen be closed when there is a bright OPEN sign outside.

We placed our order of Egg Biryani and paid for it. When it came to returning the change to us she not only gave $2.00 less but when we pointed it out argued that tax was included. So we politely requested her to do the math again and return the full change due to us.

The blabbering Telugu idiot paused a moment from her blah-blah-blah on the phone and checked again. With a sheepish look, the clown muttered Sorry, sorry, sorry and returned the balance due to us. Of course, the bozo quickly resumed her yakking on the phone.

If you think many of our Tamil readers are crude scumbags, you ain't seen these classless Telugu shanis running businesses in the U.S. They are sick weirdos who seem to have missed the evolution boat.

By the way, no plates, napkins or spoons were included with our takeout order of Egg Biryani.

The clueless monkeys at Paradise Biryani Pointe on Oak Tree Road, Edison served us the most flavorless, spiceless monstrosity of an Egg Biryani accompanied by spoiled gravy and poor service after charging $11.99 before tax.