Rare are books by Indian American writers that come so much from the heart like Family Life. 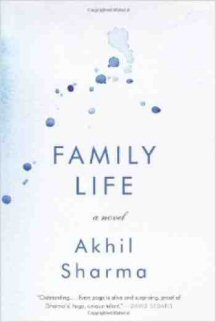 Covering a span of several decades, Akhil Sharma's Family Life is a moving account of an immigrant family from Delhi.

Like so many Indian families, before and after, the Mishras (husband, wife and two sons) come to America yearning for a better life.

The family drops anchor in Queens.

Mr.Mishra is an accountant in New York City. Mrs.Mishra finds a job at a garment factory (those days New York City still had a flourishing garment business that has now all but disappeared).

The two young boys, Birju and Ajay (the narrator of the book), join a local school.

Birju, the older boy, seems to be the smarter one and passes the tough entrance test for admission to the Bronx High School of Science.

What is life without the harsh tragedies that strike in a second but leave their impact for decades.

And so it happens with the Mishras too when a terrible tragedy strikes and changes the family's life forever.

After the devastating tragedy, the Mishra family moves to the Edison area in New Jersey.

Here's what Akhil Sharma has to say about Oak Tree Road:

Even when I left for college, shops had begun to open on the ground floors of the old houses that used to line Oak Tree Road where it enters Iselin. People ran businesses from living rooms. The houses were pressed together and had narrow, fragile front porches that vibrated when you stepped onto them. The old white men and women who lived next door would pull aside their curtains to look at you when you arrived. Inside there was usually a freezer that contained fish that someone had smuggled from Bengal.The shops carried packets of seeds for bitter gourd and the deep red carrots one finds in India which are illegal to import. There would be old women in the back who didn't speak English and who prepared food for parties. Occasionally there was a child watching TV or doing homework.

In my first two years of college, some of the houses were gutted and made into ordinary stores. Others were torn down. I saw all this. I came home perhaps twice a month, bringing laundry and taking back food. I returned so often because my mother would phone crying.

India and the Indian essence come to life in every page of this finely crafted book.

Akhil Sharma has a keen eye for detail and brings out countless aspects that distinguish Indians from other ethnic groups.

The Swamijis, the prayers, celebrating Diwali, the tendency to look up to elders and so many other things uniquely Indian reverberate throughout the book.

One complaint I have is that the later years concerning Ajay's college, job and romance are compressed in too few pages.

Did the writer get tired and just wanted to put out the book on which he's said to have worked for over a decade? - © OakTreeRoad.us