Ever since the Desi Galaxy food court on Oak Tree Road in Iselin reopened (after the fire accident that closed it for a while), I had been planning a visit.

Finally, the other day I got a chance to visit the Food Court, located at the intersection of Correja Ave and Oak Tree Rd in Iselin.

Since I have a fondness for Indian-Chinese fare, I naturally chose Desi Wok for my weekday dinner.

In retrospect, it was a bad choice as I had the misfortunre of eating the single most atrocious Indian-Chinese meal since the day I came into this world kicking and screaming.

I pretty much feel like kicking and screaming right now having eaten the three most despicable Indian-Chinese dishes.

May the pathetic bozo who calls this Indian-Chinese rot in hell, or better yet, confine him to eating this same food every single day for every meal for the rest of his life.

I was a bit taken aback when I looked at the joint menu of Desi Wok, and two other restaurants in the food court.

The funny thing is, this restaurant has the Indian-Chinese dishes listed under the Desi Dhaba heading, and the Desi Wok restaurant has such mouth watering delicacies as Batata Vada, Pav Bhaji etc.

If they can't get the menu right, how can they get the food right?

The kitchen only had two cooks in the back-ground who were Mexican, and one beat up Desi, who was pretty much there to translate.

HELP! The Mexicans are taking over the Indian restaurants all over NJ.

I don't know if you know this or not, but the small stretch of Oak Tree Road from Middlesex Avenue - Park Avenue is home to over 75 Desi Restaurants of all shapes, forms, and price range.

But what each Indian restaurant has in common is, they all have Mexicans working in the kitchen.

Desi Wok at Desi Galaxy is no exception and it has Mexicans cooking Indian food in the kitchen.

The Mexican cook gets 10 points out of 10 for multi-tasking.

He was single-handedly cooking, taking orders, chopping vegetables, and answering the phone.

What I have an issue with, is that he obviously got trained from a script.

He is oblivious to the minute details and nuances of Indian Chinese cuisine.

I have fortunately tasted the finest Indian Chinese curries at some of the best restaurants in India, Nepal, and also in the U.S.

If you have been to Desi Galaxy, you must have noticed, that it is nothing but a long list of restaurants, which are either owned by the same guy, or they share their resources because the kitchen is one loooooong room behind the counters.

The only thing different is the front of the restaurant.

Like in any food court, I paid for my food and the Desi Wok kitchen took about 20 minutes to get my order ready.

They accept MC/VI and cash, no Amex.

My order came with forks, spoons, knives etc, which you are free to take from their counter, or any other counter in Desi Galaxy, as well as a common dining area, where people can sit and eat, or simply take their food out.

Chilli Chicken and Gobi Manchurian entrees came with plain white rice on the side.

Here is my take on each of the items starting with Chicken 65 Noodles:

I have had Chicken 65 a countless number of times. Chicken 65 Noodles is a first for me.

To tell you the secret, it is nothing different. It just had Chicken 65 and Noodles with Cabbage, Carrots, and Onions thrown into it.

Chicken 65 Noodles were made using thin noodles that did not have any texture, and the chicken 65 was marinated in, horror of horrors, mint. 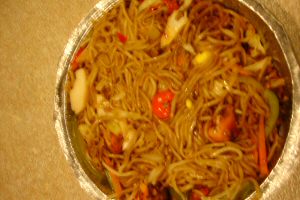 Awful Chicken 65 Noodles
I have enjoyed Chicken 65 many a time, but never with an overpowering mint flavor.

Imagine, Noodles with a strong mint flavor (Perish the thought).

Utterly dissappointed with my Chicken 65 Noodles, I turned my attention to the second Chicken entree.

Chilli Chicken, now this is one dish you can't screw up even if you tried very hard.

But the Mexican cook at Desi Wok has obviously no clue what Chilli Chicken is all about.

He just followed the recipe his masters gave him, and did the best he could, in addition to chopping veggies, taking orders, charging cards, and customer service.

Chili Chicken was dry, and had too much garlic.

Worse, the chillies that give the flavor to this Chicken entree were missing completely.

And the gravy was conspicuously missing, even though I told him three times to keep a little gravy.

Sometimes in life when it rains, it pours.

It was one misery after another that came in the form of Chilli 65 Noodles, Chilli Chicken and Gobi Manchurian.

It just had too much garlic.

As if the overpowering garlic flavor was not enough, the coating was too thick.

And just like my Chilli Chicken order, Gobhi Manchurian dish lacked gravy even though I specifically requested three times to make it with gravy.

I don't know if they (the restaurant) have a proper Chinese chef at all, or this is their only claim to fame.

They say, you get what you pay for.

Desi Wok will go easy on your wallet, but please leave your expectations at the door.

Your neighborhood Chinese restaurant can make much better Chinese food than this.

For all the three entrees I tried at Desi Wok launched one merciless fusillade after another on my tastebuds.

If you plan on trying even after reading my experience, I suggest ordering ahead to save time if you are picking up.

The line was fairly long on the day of my visit (inspite of the bad food, which makes me wonder about people's taste buds).

As for me, don't expect me to see me at Desi Wok any time soon. - © OakTreeRoad.us