I am no stranger to Abhiruchi's food.

For I have visited Abhiruchi's outpost in Ryan Plaza (next to Patel Brothers Indian grocery store on Rt 27) in North Brunswick, NJ

Since I enjoyed the food at Abhiruchi North Brunswick, I dropped by the Iselin branch on Worth St (off Green St) to see if the food here was as good.

Since it was past 5PM, there was no lunch buffet and the restaurant was empty.

The Bangladeshi waiter at the counter looked slugghish as if he'd just woken up from his afternoon siesta.

I picked up the menu and wanted to order a Spicy Masala Dosa.

You see, I enjoyed the Spicy Masala Dosa at Abhiruch North Brunswick and was hoping for a repeat at the Iselin branch.

While browsing the menu, I spotted Hyderabad Dum Chicken Biryani ($7.99) listed under Biryani Specials and added it as a takeout.

In retrospect, ordering the Biryani was a monumental blunder.

Well, anybody can be wise after the event.

To call Abhiruchi's Hyderabad Dum Chicken Biryani trashy would be an understatement.

For it was one of the worst Biryanis to hit my tastebuds. 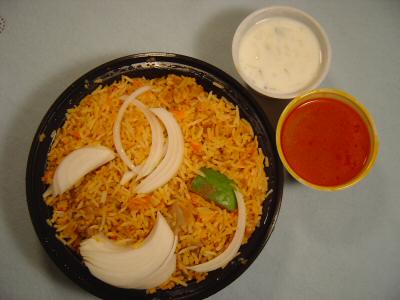 True to the description provided in the menu, Onion Chilli Utappam was spicy.

Onion Chilli Utappam was evenly cooked and came piping hot to the table along with three sides sambar, tomato and coconut chutneys. 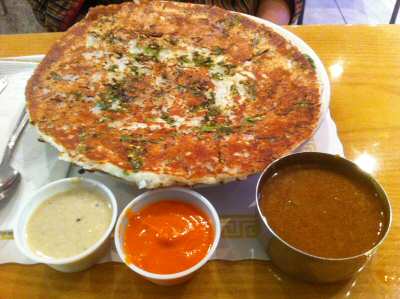 Abhiruchi's Utappam was thick and tasty. All in all, I had no complaints with my Spicy Onion Chilli Utappam.

As I was digging into my Utappam, the waiter brought my Paper Dosa. 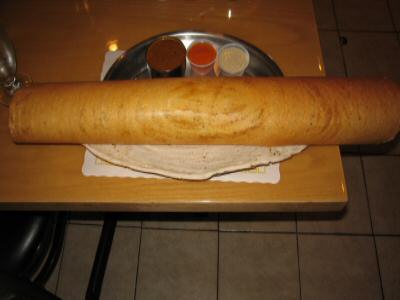 Good Paper Dosa
As promised by the menu, Paper Dosa was crisp and came with sambar, tomato and coconut chutneys on the side. Paper Dosa was big and tasty. For $4.50, I would say it's good value for your bucks.

Needless to say, I dug into Abhiruchi's Paper Dosa with mucho gusto.

While I liked both Onion Chilli Utappam and Paper Dosa, the sides gave me greater delight.

Tomato and coconut chutneys were both at room temperature and not freezing cold like at a lot of other New Jersey Indian restaurants.

I cannot think of a restaurant in Edison or Iselin that serves better tomato chutney.

Coconut chutney was a close competitor to the tomato chutney, both in taste and smell. It was so delicious that I unabashedly sought a second helping.

Sambar came hot to the table and included onion, carrot and tomato pieces. It was medium thick and had a nice black pepper flavor and taste.

Like most Indian restaurants on Oak Tree Road and Green St, Abhiruchi Iselin too has the look of a dump.

As you enter, you have tables upfront and on to the left of the front door, cash counter in the rear left corner, kitchen in the rear and restrooms to the right of the kitchen.

The Bangladeshi waiter was lethargic and did not care to greet us or shown us a table.

He was standing behind the cash counter looking at a bunch of sheets clipped to a small board.

The waiter was so indifferent that I wondered whether the restaurant was open for business.

Sure there was a huge well lit open sign outside. But if you are a regular visitor to Indian restaurants in New Jersey, you would know that a open sign is no guarantee that the restaurant is really open for business.

I picked up a menu and walked upto the cash counter and asked the waiter whether the restaurant was open for business. On hearing his affirmative response, I placed my order.

Yet another irritating thing was that my Hyderabad Dum Chicken Biryani takeout did not come with any napkins, plates or plastic spoons or forks.

Also the dining hall was dingy with poor lighting. The waiter was so lethargic and sluggish that he took nearly 15 minutes to act upon our request to switch on more lights.

Starve if you must but avoid trashy Hyderabad Dum Chicken Biryani from Abhiruch Iselin outpost near Oak Tree Road.

I will not recommend Hyderabad Dum Chicken Biryani even to my bitter enemies. For it is so trashy.

On the other hand, I enjoyed the Paper Dosa and Onion Chilli Utappam along with the delicious side chutneys and sambar.

I strongly suggest you stick to Utappam or Paper Dosa at Abhiruchi's Iselin outpost and steer clear of it's dump oops Dum Chicken Biryani.- © OakTreeRoad.us